This is about information: who controls its flow, who uses it, and who watches you when you use it.

This is about you. Because you access information — or content — on the internet, and because you probably create it as well.

Will someone have the power to tell you what content is and is not appropriate? Who controls what happens to the content you publish? Will someone use your content to deceive or mislead?

Just this month, 3 news stories have brought these questions into sharper focus. Will we, as writing professionals, have good answers? We’d better, because I don’t know if anyone else will.

On March 1, Twitter CEO Jack Dorsey promised to start measuring the platform’s “health” as a first step to freeing users from trolls and propaganda. (Josh Bernoff does a great job of  breaking down the announcement.) Admitting that “we didn’t fully predict or understand the real-world negative consequences” of Twitter’s free-for-all format, Dorsey promises to get busy and fix the problem.

Can he fix it?  Can he put the lid back on Pandora’s box? It strikes me as too little, too late. END_OF_DOCUMENT_TOKEN_TO_BE_REPLACED

We’re having “a national conversation about language.”

So said Peter Sokolowsky, a lexicographer for Merriam-Webster Dictionary, during an interview last week on CBS This Morning.

A national conversation about language? I don’t recall that ever happening before. If you ask me, it couldn’t come at a better time.

When the M-W Dictionary went online in 1996, Sokolowsky explained, it was the first time the dictionary’s curators could see what people were curious about. They’d never before been able to collect data about which words people were looking up.

In the past couple of years we’ve become hyper-aware of fake news, alternative facts, and the ways people use words to twist reality — or accuse others of twisting reality.

The watchers at M-W are doing their part: keeping close tabs on what people are looking up. When United Airlines sought volunteers to give up their seats and then had a passenger dragged off a plane, thousands of people went to the dictionary to look up the meaning of volunteer. Merriam-Webster’s Twitter account took note. 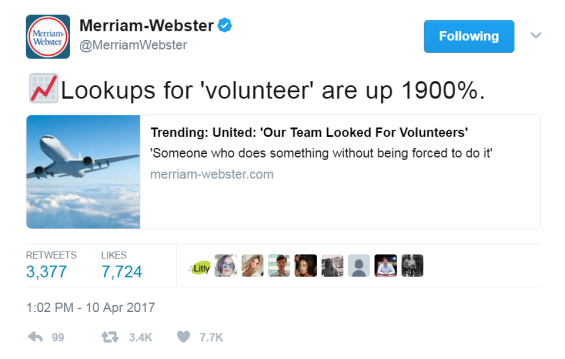 We live in the age of the short attention span. Sound bites rule the airwaves. More and more, if it can’t be expressed in 140 characters or less, nobody has the patience to listen to it.

Instead of 150 years ago today, I wonder what it would’ve been like if Lincoln had written the Gettysburg Address in the age of Twitter. Something like this, I imagine END_OF_DOCUMENT_TOKEN_TO_BE_REPLACED

A lone tweet arced across the sky and caught my attention:

Listening to a show on internet addiction. Is it the internet, or the stuff that’s on it? The medium, or the message?

I replied that it’s both the message and the medium: I think it’s some of both: appealing content, convenient packaging.

The Internet gives us two things that, as humans, we crave: inclusion — the sense of belonging to a community and being accepted — and information — keeping up with what’s going on in the community and in the larger world. END_OF_DOCUMENT_TOKEN_TO_BE_REPLACED