You probably recognize the opening lines from Billy Joel’s 1989 song “We Didn’t Start the Fire.” Images of news, sports, and pop culture from Joel’s lifetime flash by in a steady montage. Joel was saying that his generation — my generation — didn’t mess things up because, well, things were already a mess when we got here.

We didn’t start the fire. It was always burning. 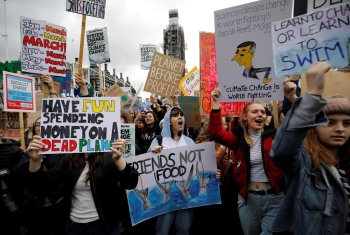 But in the 30 years since then, our generation has done nothing to put the fire out. If anything, we’ve thrown on more logs than any generation before us.

I thought about that on Friday when young people around the world filled the streets, demanding action on climate change. Your inaction is destroying the planet, they said, and today’s young people will bear the cost. END_OF_DOCUMENT_TOKEN_TO_BE_REPLACED

With the Chicago Cubs in 2016, backup catcher David Ross played in only 75 games (out of 179). Yet, when the Cubs won the World Series, the other players carried him off the field on their shoulders.

Because Ross was a good teammate. The oldest player on the team, he was known in the locker room as “Grandpa.” The younger players knew they could have fun with him, but they also knew they had an honest, dependable mentor.

The team’s manager, Joe Maddon, depended on Ross too. As a player working with fellow players, Ross could provide guidance and leadership the manager and coaches couldn’t. The kind of leadership that says, “I’m in this right along with you.”

Lots of leaders lead from up front, like a general riding into battle.

Some leaders lead from behind — providing guidance and removing obstacles, but preferring to cast the limelight on the team rather than on themselves. Leading from behind has much in common with servant leadership.

Then there are leaders, like Ross, who lead from within. Rather than a job title (VP, Director, Manager), their leadership is based on the trust and respect they’ve earned from the team.

Now retired from baseball, Ross has written a book, Teammate, in which he describes the attributes of a good teammate — in baseball, in business, or anywhere. END_OF_DOCUMENT_TOKEN_TO_BE_REPLACED

You’re a star performer. The other members of your team aren’t. What do you do? Last time we looked at a few things that don’t work — whether you’re the best basketball player in the world, a popular and accomplished baseball player, or an all-star technical writer on a team that isn’t getting the job done.

Now here are some things that do work.

What does work: Have faith in the team

Remember: while you might think you’re the only star on the team, the team members probably don’t share your view.

Here’s something else to remember: no one on your team is trying to fail. Nor are they incompetents, unable to do the job.

Somebody hired them, thinking they had the necessary skills. Surely, then, you won’t need to look very hard to see the qualities that can turn your teammates into capable performers, even if they’re struggling with the current project.

So try a dose of humility. END_OF_DOCUMENT_TOKEN_TO_BE_REPLACED

You’re a star performer. The other members of your team aren’t. What do you do?

In the business world, almost everything is a team sport. As a technical writer, for example, you might be an all-star. But you succeed only when the other members of the team — writers, editors, artists, publishers, SMEs, managers — do their jobs effectively.

So what do you do when they’re not effective? Here are a few things that don’t work.

What were you THINKING??

You’ve probably seen this photo of LeBron James, by all accounts the best basketball player in the world. He’s confronting teammate J.R. Smith after Smith’s mental blunder in the first game in this year’s NBA Finals.

James’s Cleveland Cavaliers went on to lose that series — but not because he didn’t give it his all.

He spent more time on the court (by a wide margin) than his next busiest teammate. He attempted more shots. He accounted for nearly half of his team’s assists.

In sports we often admire the guy who “carries the team on his shoulders.” But when a team needs to be carried, when it relies too much on one person’s contributions, that’s not a good thing. END_OF_DOCUMENT_TOKEN_TO_BE_REPLACED

To find elder statesmen who are still venerated, you might need to go to Middle Earth.

But there is something I can do. And it turns out I’ve been doing it all along.

In Age: The Last Socially-Acceptable Bias, author Chip Conley describes returning to the workforce in his mid 50s, saying that “what I lacked in DQ (Digital Intelligence), I made up for in accumulated EQ (Emotional Intelligence).” The experience, he says, turned him into a modern elder.

Long ago, and still today in some communities, the oldest members were venerated. In the mid-twentieth century world that I grew up in, elders in the workplace were handed a gold watch, shown the door, and expected to shuffle off to a rocking chair.

On reading Conley’s article, I instantly embraced the term modern elder because I recognized the need to redefine the status of elders in the workplace, and because I realized that it’s something I already try to embody.

According to Conley, a modern elder is “someone who marries wisdom and experience with curiosity, a beginner’s mind, and a willingness to learn from those younger.”

As I pulled Conley’s definition apart, I saw something that I hope others see when they look at me. END_OF_DOCUMENT_TOKEN_TO_BE_REPLACED

At next week’s STC Summit I’ll present They’re Coming! Combining Teams and Cultures. If you’re coming to the Summit, I hope to  see you in my session on Tuesday, May 22, at 4:00.

If you work for a company in almost any field, chances are good that you recently went through a merger or acquisition, or that you’ll go through one soon. Research by the  Institute for Mergers, Acquisitions and Alliances (IMAA) shows that M&A activity has increased steadily over the past 30 years, in every part of the world.

They’re Coming! is about the changes in people, workflows, and tools that accompany mergers and acquisitions (M&As).

On both sides of an M&A, fear might drive people to think They’re coming! A bunch of strangers is coming to take away my job or to wreck the corporate culture I’ve enjoyed.