The FAKE NEWS media…is the enemy of the American people! (February 2017)

Our Country’s biggest enemy is the Fake News so easily promulgated by fools! (June 2018)

Of all the odious things the U.S. president has said — and there are many — these are among the most odious. They’re certainly among the most dangerous. (When the president says fake news, of course, he’s talking about mainstream press whose reporting isn’t to his liking.) 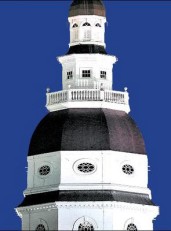 The Maryland state Capitol, from the Capitol Gazette’s masthead

Yesterday a gunman killed 5 people and injured 2 more in the newsroom of the Capital Gazette in Annapolis, Maryland. While he didn’t wear a red hat or shout “MAGA” — the hallmarks of a radical Trumpian terrorist — he might’ve been emboldened by the president’s words. The words certainly did nothing to dissuade him.

Maybe he thought he could silence the press.

Shortly after the gunman was taken into custody, Gazette reporter Pat Furgurson called his wife. CNBC’s John Harwood, a friend of Furgurson’s, describes the call:

my high school classmate Pat Furgurson is a Capital Gazette reporter. He told his wife Becky (also a classmate) that he's safe, charging his phone, trying to find colleagues and "putting out a paper, goddamn it"

Today, journalists in Annapolis and every corner of the world will put out a paper, goddamn it. Some, like Pat Furgurson, will work in the face of tragedy. Some will risk imprisonment or even death. But their work won’t stop.

The Times-Picayune kept working while Katrina destroyed their homes.

WDBJ didn't stop working when two of its reporters were murdered on air.

KHOU 11 kept filming as their offices flooded during Harvey.

The Capital Gazette will put out a paper tonight.

You cannot stop us.

(This tweet from Kyle Feldscher sparked a chain of other, similar stories of journalists continuing to do their jobs even as tragedies turned their lives upside down.)

Men and women of the press — the journalists and those who work with them — are fighting for the people: working to find the truth and disseminate it.

For us technical writers, journalists are our kith and kin. To a great extent, we share the same skills — interviewing, researching, clear writing, critical thinking — and the same passion for finding and disseminating the truth.

Today we honor those who were slain in Annapolis: Gerald Fischman, Rob Hiaasen, John McNamara, Rebecca Smith, and Wendi Winters. Let’s also honor the other men and women of the press who serve the people by fighting for the truth and lighting a lamp in the darkness.

5 thoughts on “Putting out a paper, goddamn it”