Look at these two maps. They’re based on the same data: population gain or loss by county. But they tell vastly different stories.

In the first map, the graphic artist started with the two extreme values in the data set (-6.3% and +28.7%) and divided the color scale into 5 equal pieces. As a result, all of the counties losing population are lumped together with counties that had no change or that posted slight gains. 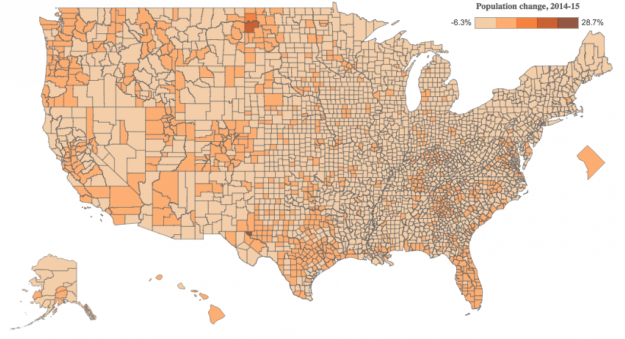 The map tells us that a lot of counties lost population or held steady, several counties added population, and exactly two (one in the top middle and one near the bottom middle) added a lot of population. Frankly, it’s not much of a story.

Now look at what the Washington Post‘s Christopher Ingraham did with the same data. Ingraham changed the color scheme: blue counties gained population and red counties lost. The color intensity changes for counties that gained or lost more than 1% or 2%. 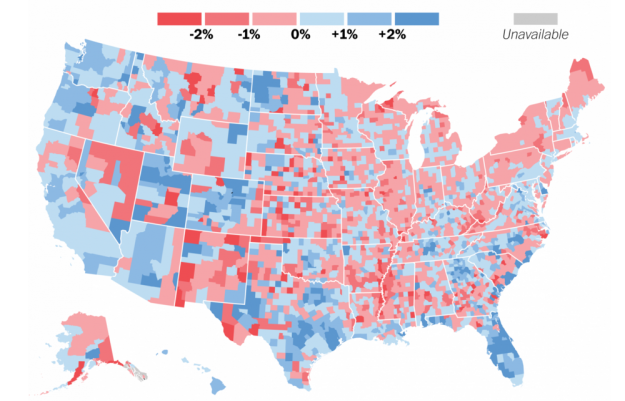 Now you can see a story. “Rust belt” areas in the Northeast and the upper Midwest, along with the lower Mississippi valley, lost population. People migrated to the Pacific Northwest, the Rocky Mountain region, Texas, and the Southeast coast. (And, as Ingraham points out, to the oil fields of western North Dakota.)

If you ask me, Ingraham made his point very, very well.

I recently attended Edward Tufte‘s one-day class, Presenting Data and Information. Tufte emphasized that, as a communicator, you have to respect your reader: allow them to interpret the data as they see fit, and provide honest data. Don’t distort the graphs. Don’t cherry-pick your results. Don’t use complexity to hide the truth.

None of those is incompatible with telling a story, delivering a message, or influencing your reader. For proof, I give you Christopher Ingraham’s blue and red map.

Ingraham tells a story without distorting or manipulating the data. In fact, he makes the data easier to see. He still invites you to digest as much or as little data as you like (the map shows more than 3,000 counties). He trusts you to draw your own conclusions. In Tufte’s words, he respects you. All the while he’s probably enlightening you and might well be influencing you.

I’ve written before about weaving together stories and data. But the timing of Tufte’s class and Ingraham’s article brought it home for me again.

Tufte’s admonition to respect our readers, along with this striking example from Ingraham, ought to serve as an inspiration for every technical communicator.

Tell your story. Respect your reader.

2 thoughts on “Tell your story, respect your reader”