What’s going on in France?

I’m talking about the way some people are reacting to the modest spelling reforms put forth by the Académie Française. According to a New York Times report, no sooner had the Académie proposed removing the circumflex from some words (only in cases where there would be no ambiguity), than Je suis circumflex became a thing on Twitter. It’s a nod, of course, to last year’s Je suis Charlie [Hebdo] meme. 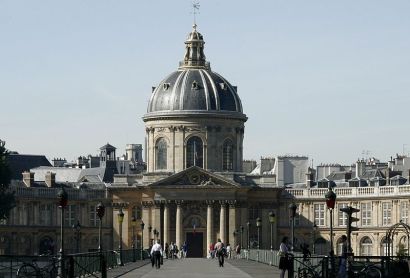 We don’t need an Academy of English. But if we ever get one I hope it has a classy building like the Académie Française. (Source: Wikimedia Commons)

You might think that I, a lover of language, would join the movement. But I won’t. Here’s why.

I grew up in an orderly home. There were rules. There were right ways and wrong ways to do things. As a result, life was pretty predictable. I liked that.

At school I learned the rules of grammar. I didn’t just learn them — I soaked them up. There was a right way and a wrong way to speak and write. I liked that.

Those rules became ingrained. Never split an infinitive. Never end a sentence with a preposition. Never use a plural pronoun (they) when talking about just one person.

Then a funny thing happened. As I grew older, I watched the English language evolve. I had a ringside seat, in fact, because I made my career in writing.

English evolved, because that’s what languages do. They evolve.

It took a while for me to see it, but over time those rules proved to be more rigid and less sensible than I’d supposed. Often, trying to obey the rules, I wrote myself into a corner. I learned that sometimes it’s best to ignore the rules.

A few months ago I even embraced the singular they. Because languages evolve.

So, back to France and Je suis circumflex. People are basically saying you can take my little hat when you pry it from my cold, dead hands.

I know that the French treasure their language, that they see it as an extension of their culture. And perhaps, like me, they like the orderliness that comes from having rules.

But just as the French culture has evolved through the centuries — being enriched by the likes of Hugo,  Monet, and Sartre — perhaps their language should be allowed to evolve as well.

Because that’s what languages do. They evolve.