There were two instances in which I thought I was smarter than my boss. Both times, it turned out I was wrong.

Walt (not his real name) was a born-and-bred Southerner, with an easygoing style a and an accent straight out of Mayberry. Still in my twenties, having just moved to North Carolina from “up north,” I quickly pegged him as a rustic.

Walt managed another team at first, but in time I was moved over to his team. I actually thought that while he was nominally the boss, I could pretty much handle things as I saw fit and he’d never be the wiser. (I was a cocky young pup, wasn’t I?)

Once I began working for Walt, and I was able to see him close-up, things changed. Gradually (it would’ve been faster if I’d paid more attention) I came to realize that he knew a lot about how a business should work.

Adept at reading people, Walt used his low-key style to defuse conflicts and forge consensus. It occurred to me later that he probably knew I held him in disdain, but he never mentioned it. (Did I mention that Walt was also extremely gracious?)

My disdain turned to respect. I learned never to underestimate people. I also learned, after living in the South for just a short time, that an easygoing style and even a Southern twang don’t even remotely imply that someone is a rustic.

Tom: the babe in the woods

About 10 years later, I worked for a great manager who, not surprisingly, received a promotion and moved to another position. Everyone on our team thought — and said, when we were asked — that the manager who replaced her should have a lot of experience. Our old manager had dealt expertly with some difficult political issues, and the new manager would face those same issues. 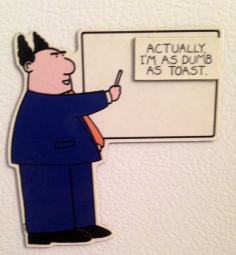 We all laugh at this guy. But in my experience he’s turned out to be wholly fictitious.

When the new manager was announced, it was someone we knew: Tom, a gifted technical writer and team-lead. But he had no management experience whatever. And from the first day he seemed overwhelmed: unable to comprehend the political battles into which he’d been dropped, not knowing what to do even when he did comprehend.

Even though I’d known Tom as a colleague, I took an immediate dislike to him when he became my boss. I thought that upper management had betrayed our team by making us work for a babe in the woods. For the first time in my career, I felt burned out.

It took some time, but here’s what I learned about Tom. While he wasn’t street smart, he had a ton of integrity and a strong sense of what was right. By standing firm and by clearly stating his expectations, he navigated the political waters with a steady hand. When he made mistakes, he owned up to them and stayed focused on finding a way forward.

I know that Tom’s job would’ve been easier if I, one of his senior people, had been more cooperative and less petulant. But he handled even that situation deftly, assuring me that he was in my corner but insisting that I respect his position as my manager.

After about 8 months, Tom helped me find a new position within the company. (That’s when I moved from technical communication to marketing.) By then he’d earned my respect. And while we never were what I’d call friends, I could look him in the eye and tell him I’d appreciated working for him.

From that day to this — a space of more than 20 years — I’ve never thought that I was smarter than my boss. That’s not to say all of my bosses have been great people managers. But they’ve all been gifted in some way.

Mercifully, I’ve learned to be careful to look for their gifts and slow to judge their faults.

Except in very rare instances (such as nepotism), managers have earned their stripes. Your boss didn’t get to be your boss by being dumb. They were good at something — probably at several things. If those things aren’t readily apparent to you, follow Amy Gallo’s advice: bide your time, make sure you’re not judging your boss too harshly, and seek to cooperate.

Care to share your own experiences with bosses you’ve underestimated? If you’re a manager, have you ever had an employee who thought they were smarter than you? How did you handle it?