They put brine on the roads on Monday, but Tuesday’s rain washed most of it away. So when it started snowing — hard — around noon on Wednesday, traffic quickly ground to a standstill. A photo showing a car that caught fire when its driver tried desperately to get unstuck (a photo taken about 3 miles from my home) became an Internet sensation.

And sure enough, like icicles on the eaves, the climate skeptics started cropping up. It’s so darned cold in the eastern U.S., they say, that climate change must be a fraud. Never mind that other parts of North America are experiencing weather that’s much warmer than normal. Never mind that the winter of 2014, harsh as it is, is still milder than what we were used to in the 1970s. (Don’t take my word for it. Take Justin Gillis’ word in the New York Times.) 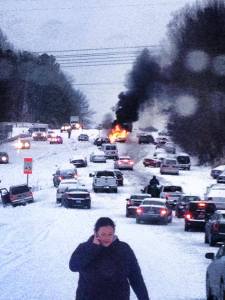 Lindsay Webb of Raleigh, N.C., took this photo during the snowstorm of February 12, 2014

Climate change (or global warming, if you prefer) is real. It’s one thing to disagree over what causes it, or to disagree about what should be done about it. But how can we still be arguing about whether climate change exists, as happened this week on Meet the Press?

We’re arguing because we need less propaganda (on both sides) and more factual information, presented in a way that’s understandable to the general public and doesn’t push any one public-policy agenda.

Fellow technical communicators: this is our chance to shine. Who else has the talent and the know-how to convene a group of subject-matter experts, distill and organize information, and write content that’s balanced, dispassionate, yet informative and easily to understand? Get the facts out there, then let people debate about causes and about policy.

I’ll be the first to tell you that I don’t like snow and ice. Warming sounds pretty good right now. But I’m under no illusions: climate change is a serious problem. Its effects are profound. Technical communicators have a vital role to play. Will we answer the call?

1 thought on “Climate change: Will technical communicators answer the call?”